Editors Note: No we did not make this one up, it was really found online in the Castanet News in the Okanagan’s Discussion Forums by a man who uses the username of Wun Feather. To the best of our knowledge he is a legitimate member of a First Nations Band. Our reason for selecting this letter is that in many ways it could have been written by one of hundreds of local Wet’suwet’en who just want to be left alone, be allowed to work for a living, and not have to fight with the bums (protestors) in order to earn a decant living.

The intent of the letter seems to indicate it should be begin with, Dear Protestor……

This post is gonna hurt some feelings. (sorry)
I am good with that.
I am totally tired of people who say stupid things like “Give us back our land”.
Like seriously.
I like to look them in the eyes and say:
“Ok. If you had your land back, what would you do with it?”
I will wait for the answer.
Have you ever taken the time to use google maps and look at the huge tracts of Federal land that are not being used for any purpose at all?
No one is trapping any beavers on the land.
No one is hunting wolves or coyotes, or any other fur bearing animal on that land.
Very rarely do you ever see anyone hunting anymore.
If we compare that land to the land owned by the Hutterite Colonies, you would *bleep* yourself if you saw what they are doing on their land.
They have hay and oats and barley and grain, and they run large herds of livestock and flocks of domestic geese and chickens.
Well, ever since I was 18, I have owned my own home.
Seriously!
I bought my first mobile home in Fraser Lake BC and darn it all, it was mine.
Nobody gave it to me.
I never held my hand out for it like a pet monkey in a zoo.
I earned it.
And I have never, ever, EVER been without at least one house on land ever since that day.
I guess you could say that I am the kind of Indian who just goes to work every day, and buys my own piece of land with the money I earn at my job.
I have every single right that anyone else in Canada has.
Oh.
But because I am a status Indian, (I am non Treaty.) That means even though I am Status, I am not bound by any treaty agreements or obligations.
I have WAY more rights than most Canadians.
Firstly, I have the right to be free.
I have the right to become educated if I want to.
I have the right to freedom of speech, and I have the right to every single privilege that any other Canadian has.
But that is not where it ends!
I can hunt and fish and trap and do significantly more than all my non Indigenous friends do.
No one has ever stopped me from trapping animals for subsistence on crown land.
No one has ever stopped me from hunting for subsistence on crown land.
No one has ever stopped me from gathering medicines, plants, fungi, berries or roots for traditional or ceremonial purposes.
So if I can do all those things like my ancestors did before me, why would I want to have that land back??
Isn’t it actually already mine to use anyway??
Only, unlike the land that I have bought for myself over the years, I do not have the burden of paying property taxes on the land where I harvest my moose.
I just drive out there, walk a few miles along a river amongst the red willows, and when I see a bull moose, (I don’t take cows because they make baby moose), I decide if it is the right one for the freezer.
Here I am with a couple of wolves in this photo.
I can use the meat, skin and tan the hide, and I can use the fur to make a nice blanket or for the top of my moccasins.
Yep. I still have those too!
You will never hear me say that you owe me any land.
As Canadians you have already given me the most important things.
And that is the freedom to carry on my Indigenous culture and traditions on Crown Land.
I don’t want my land back.
I already have purchased my own, and I have the rest of the Canadian Boreal forest to do anything else I want to do.
Thank you Canada.
That is more than enough for me.
Oh. Just one more thing.
Thanks for not standing in my way when I go to work each day.
That would really suck if you did that.
And I promise not to stand in your way either.
That’s what us real Indians call “A GOOD TRADE” 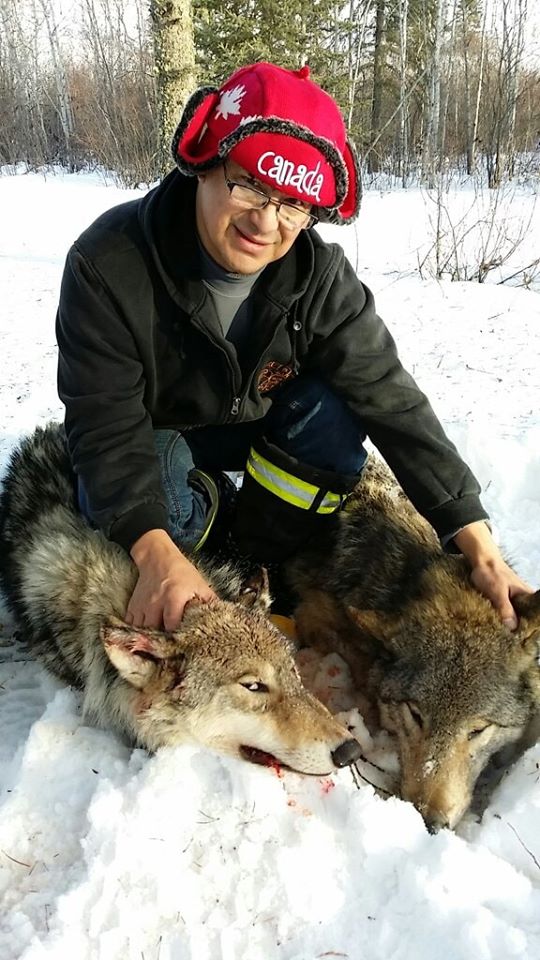