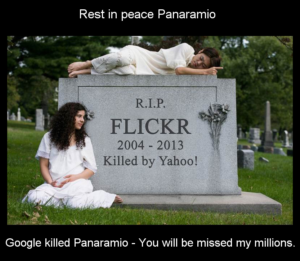 I am sure you are all aware of how much fun it was to explore Google Earth, and look at eye witness photos of what life is like down there on that part of our plant.

The bad news is the Google Earth simply closed the doors on Panaramio, they don’t need the millions of people who contributed their photos anymore. Over the next year they want all of you photographers to move to a much better location called Google Plus where they can load your pages full of commercial advertisements.

This is the second blow in a row for both professional and amateur photographers. Yahoo bought out Flickr and put the professional photographers in a tailspin, because all pro accounts were not required to have commercials.

In a greed driven world its actually not coming as a shock, Google has been threatening to do this for some time now, but rather than communicating this with the hundreds of volunteers from around the world, Google misled them all pretending things would be fine, and no closure would be forthcoming.

The most embarrassed people in the world are now the administers  who were staunchly defending Google Earth and encouraging people to continue to upload, label and tag photos. Imagine how we feel as photographers willing to dispose of so much time and effort, to contribute to Google?

Google wants you to keep your photos on Panaramio then migrate them to Google Plus, they have not figured out the only reason for Panaramio’s existence was viewing photos from their origin on Google Earth, they have to be bat whack stupid if they think people will sift through 700 pages of photos to view your online photos. There is absolutely zero organization in the Panaramio photos so without Google Earth they are 100% redundant, even on Google Plus, there will be little to no exposure there either, but it makes money for Google Corporation.

To add insult to injury, in the last year or so Google has also been assisting every scumbag website up there in a legal maneuver to steal our photos  and use them for profit by using Google supplied API to embed our photos onto their websites so they can make money from our photos.

My recommendation is simple, close your accounts before Google uses its fine print clause to make money from your donated photos. By closing your accounts, all your photos will be deleted, yes all your hard work flushed down the toilet, or you will be donating them to Google for further exploitation.

Well we will be joining the thousands if not millions of users who will no longer bother installing a redundant Google Earth.