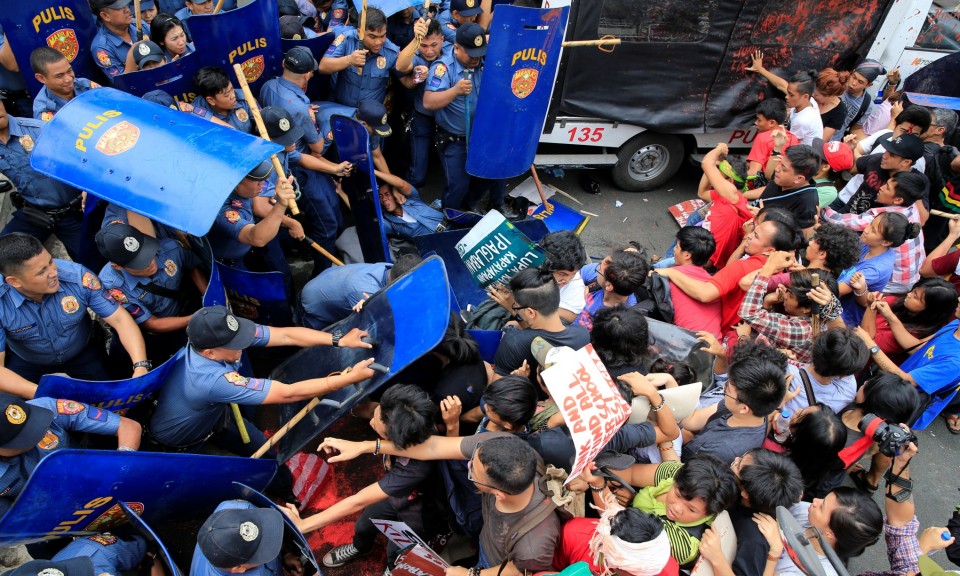 Look at the age of these kids, what kind of parents sends their kids into harms way? Is this a peaceful protest?

Yesterday was an amazing day in the Philippines, for days now we have been bombarded with updates on Super Typhoon Haima. At its peak, Haima packed winds of up to 315 kilometers per hour (195 mph), the equivalent of a Category 5 hurricane on the Saffir-Simpson Hurricane Wind Scale.

At least 7 people were killed Sunday as Sarika crossed the archipelago north of Manila as a Category 4 storm. Almost 10,000 people were displaced, according to aid organization Care International.

Then it was like a news blackout on the Typoon and its become completely insignificant, almost in a very scary sort of way, it was like the typhoon vanished into thin air.

A the very height of the storm, nobody cared about it, not one news media outlet in the Philippines in particular out of Manila gave a rats ass about the victims of the typhoon, they were all covering the little police truck that ran over some of the rioters.

Yes the press covered that story really well, the PNP were made to look like villains (maybe they were) but what really makes me wonder is why the deaths of 7 people, and 10,000 people being displayed was not even in Philippine News while every paper and TV Network ran the story about the PNP truck. (Not in the headlines, some might have carried it as a secondary importance story)

Not one person was killed in the riot, and if not for CNN and Al Jazeera there may have been little or no coverage at all of Super Typhoon Haima.

Think about it, Duterte heads for China, and in doing so he is defying the United States, and in his absence you have an organization who were desperately trying to reign in violent supporter, you can see and hear it in the videos that are online. Has anyone aside from myself noticed the media silence on who organized this protest and why they picked this particular day? If this happened under Arroyo or Aquino, you would have seen the name headlined, so if the Bagong Alyansang Makabayan intended to get the US out of the Philippines, this is their epic backfire of the century. They were played right into the hands of the very people they are trying to oust.

What I am also seeing is that political movements are hiding behind indigenous people to achieve their goals as they feel it somewhat legitimizes their actions when they cross the line of legal into illegal. Most of those people on megaphones were under age kids inciting anger and hatred, anyone who says it was a peaceful protest either was not there or already had their minds made up about what happened out of inner anger at both America and the police because that’s how the media wanted to spin this story. Using children to break the law, so that you can give a black eye to any police officer trying to arrest them, its an appalling and disgusting tactic.

All of the major papers and TV stations are saying this is a peaceful demonstration.  Would you expect a peaceful walk through that mob? When demonstrators break the law, its no longer a demonstration, its a riot.

Common sense folks, Duterte wants American out, he has been very vocal about it, so some people stir up a violent protest, and you even hear and see organizers begging people to reign in the violence on the part of demonstrators.

Without question the officer in the truck panicked, and that turned out bad, but it was due to the rioters trying to overturn the truck.

Today instead of talking about the displaced homeless victims of the typhoon, the headlines read Duterte is to blame for the riots. Do that math, get rid of Duterte, replace him with the same people who kept and put the Americans into the Philippines.

The perfect CIA endgame, turn the people who oppose American bases against their own anti-American President, seek his ouster and it’s a win win endgame for the USA. If the Americans wanted to give Duterte a black eye for crossing them then Bagong Alyansang Makabayan was the tool used to deliver it.

As for the typhoon, well nobody here seems to care, except the victims.

Added October 22nd 2016 (sorry about the quality, it came from Facebook) For anyone who would question if or not the protesters were as much, if not more to blame for what happened, you need to watch this video.