Note that this massive engine carries zero passengers and weighs in at 268,800 lbs

Have you ever wondered what life would be like in a logical world? One where government did what was needed for society rather than greed based legislation? Green initiatives are a joke on society, lots of charging us to make us shut up while they do nothing to fix real problems, and use the money to get re-elected.

If Canada continues to grow in population we cannot plan on more cars only, and more roads, you can only fit so many cars on a city street, before you have to move living space to create more roads.

Let’s look at the topic of cost effective transportation.

The Canadian National Railroad (CNR) used to belong to the public but was sold off by former Prime Minister Jean Chrétien, Bill Gates is now the major shareholder of what should belong to the Canadian public, but then the Liberals and Conservatives have worked hand in hand to rob Canadians of everything we own.

In rail transportation getting accurate numbers is hard to find, I did find this one from Via Rail. Between this past March 28th and April 2nd, 71,000 passengers traveled on some 450 trains throughout the country, an increase of 2.4% compared to 2012.

To really understand what’s going on, you have to get past the numbers game, something 99.9% of us just nod to because we have no idea what they are talking about. So let’s crunch the numbers to see what they are not telling us. Please also keep in mind that a lot of the following data was gathered during the peak of high OIL prices.

The 6.6 Duramax diesel in GM’s Chevrolet Silverado 2500 HD and GMC Sierra HD trucks is rated at 397 horsepower, so if France could do it in 1935 with only 250 horsepower, what’s our excuse in Canada today?

Breaking down the numbers.  There were on average 157 people per train, lets exaggerate and say each person’s weight about 200 lbs., that’s a load of 3155 lbs. being pulled by a 268,800 lb. locomotive diesel engine (Model P42DC)

The average pickup truck would have no problem pulling that load, mind you that’s without the weight of luggage. A fifth wheel holiday trailer 34 ft. weighed in at 15,000 lbs. fully loaded, so it’s clear a 1 ton dully diesel could easily do the job. It really would depend on how we could utilize lightweight materials to build ultralight rail cars designed only for passenger traffic.

Remember that we live in 2016, and they were already using better designs than us in France in 1935

THE RENAULT STREAMLINED EXPRESS, operating on the Paris-Caen route, has a speed of 80 miles an hour, and is driven by two Diesel-Renault motors. This train, comprising two articulated cars, can be driven from either end, and has seats for 85 people.

Via Rail make the following claims.

The engine in this type of locomotive is 12 times more powerful than the engine on a bus. In fact, this locomotive can pull 1.2 times the number of passengers - plus the dining and baggage cars - and still remain the most energy-efficient transport option (for the same fuel consumption).

Would it not be fair to say this kind of mentality is insane? If corporations can hire the most brilliant minds, is it by intent our government hires idiots?

Could we not run with much smaller diesel engines, and use much lighter weight materials in rail cars like they do in most LRT systems? Look what it takes to move people in a LRT system, Via Rail is an insane waste of money, it’s also the opposite of economical, and the opposite of going green. 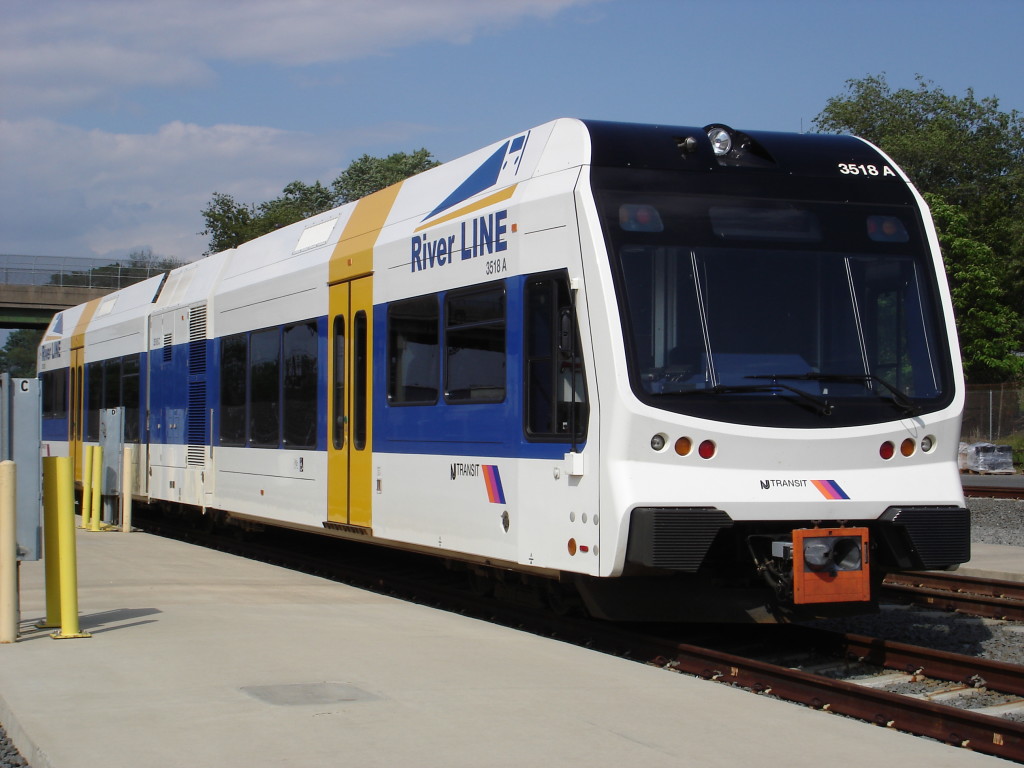 Here is what we could have, and is much more cost efficient.

If we created a rail system that would allow people to travel cheaply, by taking “private profits” out of the equation, and did it for society at cost, most people would never consider, burning all that fuel to drive across our province or country.

Look at our bus systems, for the price of a bus ticket from northern BC to Vancouver is more expensive that the cost of driving an SUV gas guzzler for the same distance. Its pure insanity, it’s also because it’s privately owned for profit, and not intended for the good of society. 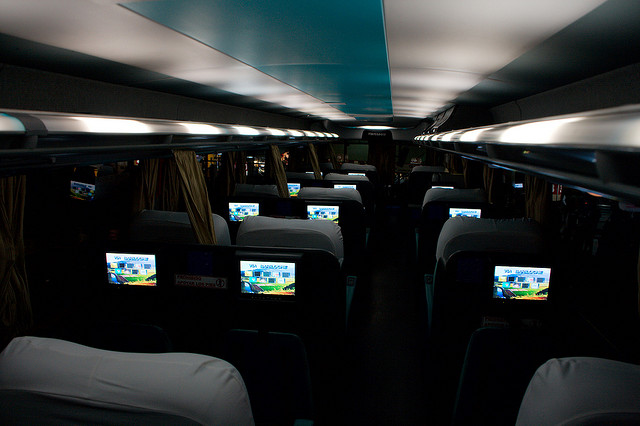 Inside a bus in Peru

There is no reason on earth other than catering to the billionaires, why we don’t have provincially or federally owned and operating bus lines operating at cost. While third world nations have buses like these (see picture) with on board washrooms, on board coffee tea and snacks, similar to international airlines, yet prices are 70% cheaper than in Canada.

Sick of Greyhounds sardine cans? Look at the leg space! Yes this is Mexico.

They will tell you it’s because of labor costs, but if you do the math they are only about 20% right and about 80% liars loading their pockets.

For reasons God only knows the last time they published a study on actual costs was in 2007 where the average cost of running a bus was at 17 cents per kilometer. The fees Greyhound charges is close to being that of every passenger on a long haul paying for 50% of the entire trip. Remember that driving a car by yourself costs an average of 23 cents per kilometer based on the numbers published by Via Rail.

All this talk about protecting our environment with environmental taxes is bullshit to put it bluntly, the only time this kind of legislation is ever approved is when some private corporation can profit while putting money in the back pockets of the politicians who pass the bills.

Often on things like plastics, we are now paying China to burn it there with our eco fees, because it’s illegal to do it here.

The fact remains that if government was working for society, then we would have less privately owned corporations and more crown owned corporations like BC Hydro and ICBC, the two that have been under a most vicious attack to destroy them by a BC Government under the direction of private corporate executives.

But let’s not go too far off topic, we need to have provincially owned and operated transportation systems, you can’t regulate corporations, they will either bribe you, blackmail you or leave.

This won’t take long, how many of you recall how “we the taxpayer” bailed out Air Canada? (2009) Let me put it bluntly. You and me the taxpayer handed over 1.02 Billion Dollars to a privately owned company. The next time someone complains about welfare bums, please remember the numbers involved when we hand out billions to the rich, and nickle and dime our poor and blame them for it as well. Not to mention that we allowed Air Canada to wipe out almost all of the competition, to insure they had a monopoly before handing them the keys to Canada’s Airline kingdom.

Air Canada has secured a 1.02 billion Canadian dollar ($922 million) lifeline with some help from the federal government

After the deregulation of the Canadian airline market in the 1980s, the airline was privatized in 1988. On 4 January 2000, Air Canada acquired their largest rival, Canadian Airlines. In 2003, the airline filed for bankruptcy protection and in the following year emerged and reorganized under the holding company ACE Aviation Holdings Inc. In the late 1970s, with reorganization at CNR, Air Canada became an independent Crown corporation. Air Canada thanks to the Conservatives under Mulroney was sold to private interests, to help fudge their book keeping, to make themselves look fiscally responsible by selling off our Canadian assets.

How many of you recall that Air Canada demanded that our government allow them a fuel charge added to airline tickets?

Now fuel prices dropped and wouldn’t you guess it! Even though most countries including the USA have dropped the surtax “Air Canada blames lower loonie for not scrapping fuel charges ”

How many of you recall how right after the fueltax was approved, Air Canada cut in half your allowable luggage?
How many of you saw a drop in prices when fuel costs dropped like a rock?

Then you read something like this “More fees, less leg room: a new normal at Canadian airlines”

Clearly this is what happens when you allow corporations to dig into our pockets with little or no responsibility to serve its customers.

It’s time we reintroduced a national airlines that is a crown corporation owned and operated by the citizens of this country, and prices based on keeping it running, but not necessarily for maximum profits. First get rid of the first class section and business class, and make it all a people class aircraft. I drives me crazy to know some billionaire is flying first class and writes it off his taxes, while you and I have to pay his taxes for him.

I don’t mean to gripe, but there is a saying when you don’t learn from history, your bound to repeat it, we get rid  of Conservatives and Liberals over and over again, but like an abused wife we keep allowing them back into our homes.